I currently own two Japanese Taito Egret II cabinets. One I’ve chosen to put in 24kHz mode and use an Ultracade Universal Video Converter that outputs my VGA sources (Xbox 360, Dreamcast, PC etc) and the other is dedicated to PCB use.

I bought this from a Swedish enthusiast whose need for cash was bigger then the need for this cabinet. It has a nice 29″ monitor that rotates easily and the cabinet also has great insides (good electronics and lots of space to house the PCBs). This has the monitor setup for 24kHz and currently runs my Japanese XBox 360.

Here’s some current pictures of it next to the Xiong Ba that I unfortunately had to sell. 1 | 2

I happened to find this in Gothenburg, so took the chance before someone else tried to snatch it away.The price was slightly high, but it was close by, and from the same batch as my first one (had recieved service by TAITO’s own technical staff). It’s great to have another one, and this will run 15kHz games only.

I snapped some more pictures of my cabinets, as it struck me how few I’ve put up on this page. You can find lots of WIP stuff on the news page, but here are some to show off what I have inside them.

The 24kHz EGRET II has a cheap old PC I bought for the random MAME game or some PC shmups such as Xeno Fighters R. And on top, my Japanese Xbox 360. That mysterious package next to the 360 games is a J-Pac. Below the PC is a VGA switch box connected to my UVC so switching from PC to 360 is really easy. Just unplug the 360 JAMMA fingerboard (bottom left in the picture), change VGA input with a button press on the switcher box, and plug in the J-Pac. Both systems are plugged into the 2.1 system at all times. To the bottom right is a sub woofer. As I have the exact same speaker setup in the other cabinet, you can get a look at how it all looks without the PC/360 inside on the pictures of that cabinet below. 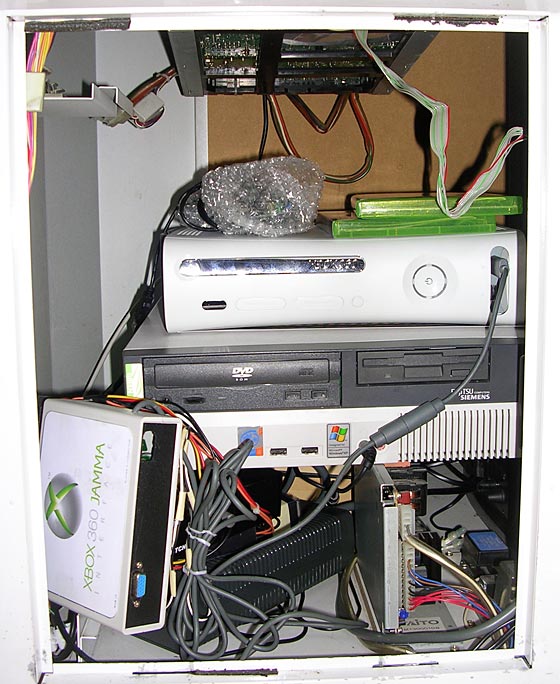 The 15kHz cabinet has a PCB holder mounted to the standard wooden board (I have three of these boards, I’m gonna mount a PS2 and a Dreamcast on one of the others for a 15kHz console solution).

On the picture below I have a CPS2 (Progear) that I doesn’t fit the holder, but as it’s encased in a plastic shell, it’s no big deal. Also, you can see that I use the stereo output on the front of the CPS2 motherboard. 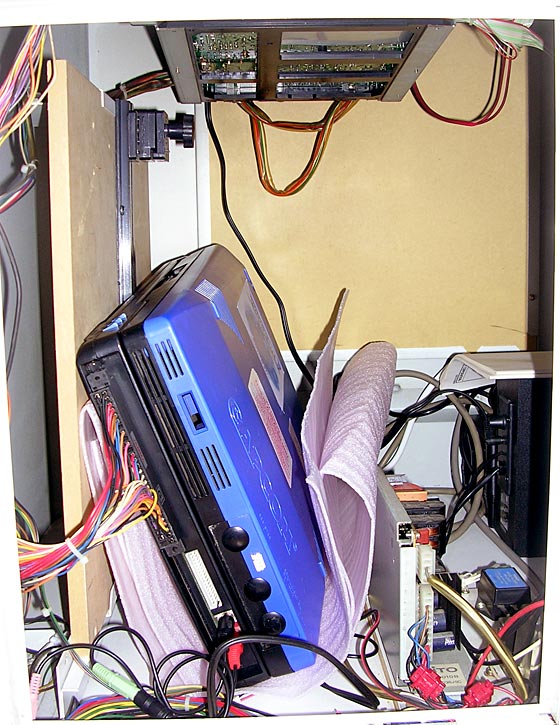 Here you can see the added power outlet (one is used by the stepdown transformer as I have 230V in my wall sockets and the other is for the 2.1 Logitech system). One slot free should I want to put a console or MAME PC in it. The sub woofer is to the right. On top are my EGRET II service manuals. On the floor of the cabinet is a high to low audio converter, that’s connected to the JAMMA harness. This is used to make the sound from JAMMA PCB’s compatible with the line level 2.1 system. It’s not connected to anything in the picture, but I just pull out the audio from the CPS2 and plug it into the end without cables to get JAMMA sound. In my 24kHz cabinet, this adapter is mounted on one of the walls of the cabinet (behind the sliding wood board). 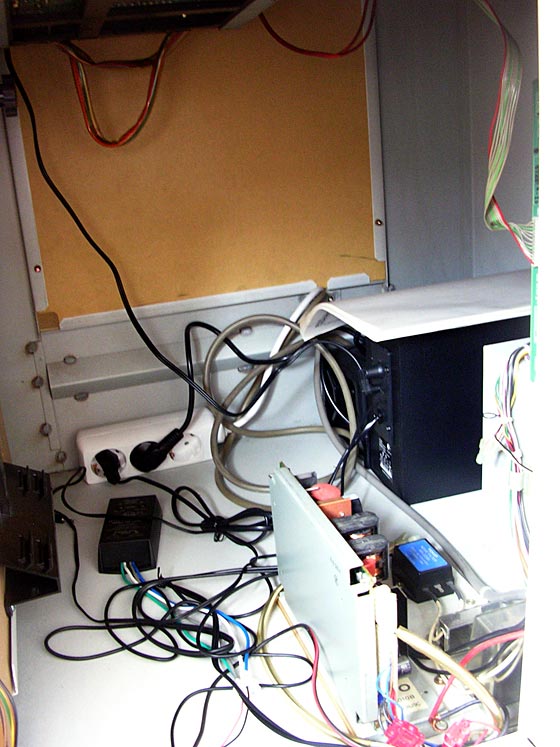 Here’s a last picture showing the MDF board with the pcb holder. I got mine from Arcadeshop.de (seems to be sold out now) but you can find them on eBay. 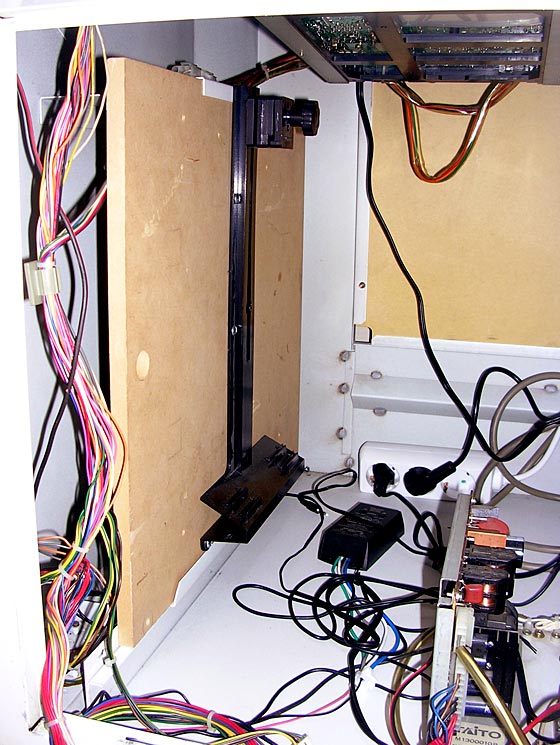 Here’s a picture of my Ikea Julius stool that with legs cut work really well with sitdown cabinets.